Magic squares are one of the simplest forms of logic puzzles, and a great introduction to problem solving techniques beyond traditional arithmetic algorithms. Each square is divided into cells, and the rules require that the sum of any row, column or diagonal in the square be the same. Given a magic square with empty cells, your job is to solve the puzzle by supplying the missing numbers. This page has 3x3, 4x4 and 5x5 magic square worksheets that will get you ready for other challenges like the printable sudoku puzzles and more! 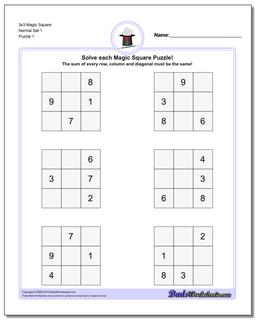 These harder 4x4 magic squares are step up from the 3x3 puzzles, but still fairly easy to solve if you have been practicing your addition worksheets. The normal squares with values 1-16 are easy to solve, but the non-normal squares may need your calculator! 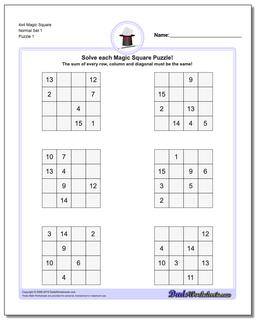 Normal 5x5 magic squares have numbers from 1-25 and can be a real brain twister. The non-normal versions of the 5x5 puzzles are great exercises for kids (or adults!) who have solid problem solving skills. 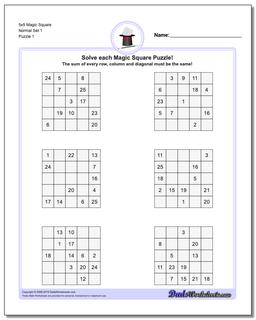 Thse worksheets start with normal 6x6 magic squares having numbers from 1-36, but the non-normal versions of the 6x6 puzzles are tremdously difficult to solve and will likely require your calculator and some time. 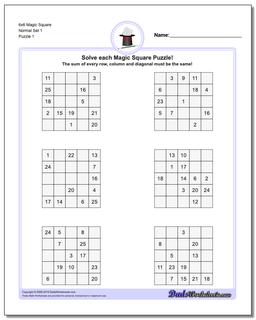 A non-normal square does not use minimal numbers in its cells, so the sums of the rows, columns and diagonals may be larger.

What is the Order for a Magic Square?

The Order for a magic square dimension of the horizontal and vertical axis of the square. Because it's square, these values for a given puzzle are the same. For example, for a 3x3 magic square we say it is an 'order 3' magic square. A 4x4 magic square is order 4, a 5x5 is order 5 and so on.

What is the Magic Constant for a Magic Square?

You can learn a LOT more about magic squares by visiting https://www.grogono.com/magic/index.php