There are many potential ways to produce a prime factorization, but some of them, especially those that start with small primes, produce very repetitive factor trees. The algorithm used by this prime factorization calculator starts it’s search for factors at the square root of the input and then checks for increasingly smaller factors. This will reuse a prime factorization of internal composite numbers more frequently and produces factor trees that are somewhat more compact (and elegant) than more naïve approaches.

Use the ‘Zoom’ button to highlight only the calculator on this page. That makes using this prime factorization calculator on smart boards or projectors in a classroom setting less distracting.

To understand what prime factorization is good for, it helps to start with the very nature of numbers and how their prime factors are used to create them.

What is a Prime Number?

A prime number is an integer that can be divided evenly only by the number 1 and itself. This is a fancy way of saying there isn't some other multiplication expression using only natural numbers that has as its product a prime number.

It's fairly easy to determine whether a small number is prime or not just by using the rules of divisibility and trial division or just plug the number into this prime factorization calculator!. However trying to determine whether a large number is prime or not is particularly hard. Factoring very large numbers that include very large primes is very difficult even with a computer and many years of time, and this is the basic reason why modern cryptography works.

What is a Composite Number?

Is 0 a Prime Number?

Zero is not a prime number, just plug it into the calculator and it'll tell you! Zero can be divided by any integer and give zero as a result, so it is not prime. It is also not composite because there are no two integers that can be multiplied together to get zero as their product.

It may surprise you, but some things like whether zero is prime or not can be occasionally controversial in mathematical circles. You can see some of the debate on the topic of where 0 is a prime number being debated here...

Is 0 a Prime Number?

Is 1 a Prime Number?

One is not a prime number. One is also not a composite number. Because a prime must be divisible by exactly two factors, including one itself, the number one fails the test for primality because it has only a single factor. Because of this bit of complexity, the definition of prime number explicitly states that a prime must be larger than one, so one itself is by definition not prime, probably to prevent fourth grade math students' heads from spinning crazily in class.

One is also not a composite number. Remember a composite number must be the product of two primes. Since we know already one itself is not prime, and there isn't a even a pair of factors (much less a deeper prime factorization) for the number one.

What is Prime Factorization?

How to Find the Prime Factorization

…and continue dividing the quotients…

At this point, we’ve observed that 72 has three 2’s in it. So 2 is a prime in the factorization of 72, and it occurs three times. However, we can’t divide 9 by 2, so we try another larger prime

So 3 is also a member of 72’s prime factorization! However, we’re not done. We need to divide the last quotient…

Don’t miss this step! It's easy to forget to divide that last quotient, but if you remember you'll see the prime factorization of 72 is...

Prime Factorization to a Factor Tree 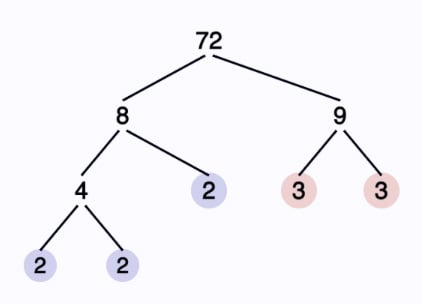 What Can You Do with a Prime Factorization?

Among other things, you can use two prime factorizations produced by this calculator to help determine the least common multiple (LCM) or the greatest common factor (GCF).

This calculator provides some great ways to conceptualize prime factorizations, but if you’re looking for another perhaps less useful but more artistic perspective, be sure to check this link out…

There are a number of other calculators on this site designed to help further your explorations of mathematics and number theory... Be sure to check a few of them out!

Apart from the prime factorization calculator on this page, you can find other math calculators in the ‘Tools’ menu in the upper right. Try a few at the links below! 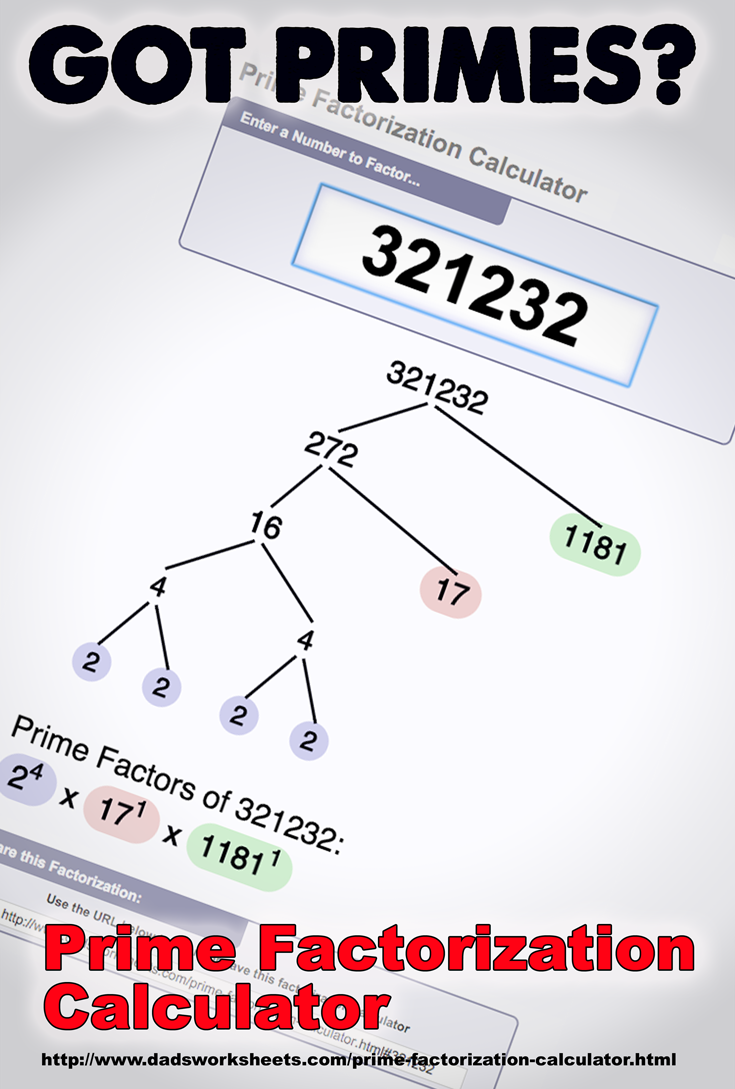