You can see in the ‘What is the Percentage’ panel different ways of thinking about the values. As you update the values in the calculator, you can see how the answer is expressed in terms like…

The calculator will approximate percentages to two decimal places, but you’ll see the percentage to a larger precision if the calculator rounded it where the main results are presented.

What value out of a whole equals a certain percentage?

What percentage is some amount out of a whole?

What fraction equals a certain percentage?

Playing with this percent calculator and seeing how different fractions and percentages change these verbal descriptions will help you understand percentage concepts thoroughly.

The word “percent” has the Latin root word “cent” in it, which means one hundred. This is the same root word in the English words century or centimeter or centennial, and it of course relates to the monetary cent which is one hundredth of a dollar. The Latin root word in percent should help you remember that percentages are always fractions of 100, and you can find all sorts of other interesting words related to hundreds and percentages if you pay attention. See this link for some more details… Where does the word Percentage come from?

…but here on this calculator page, we’re dealing with math! Those hundredths denominators are very important and they relate directly to using percentages and our decimal numbering system. Percentages are directly to numerical values and back by moving decimal places.

Hundredths are values shown as the two digits to the right of the decimal place in a real number. Because percentages are really another way of expressing hundredths, converting a percent to decimal is a very straight forward process…

Here’s a great video that shows you more about percent to decimal calculations. Percent to Decimal Calculations

The reverse calculation, a decimal to percent, is similar. Here you are starting with a value in hundredths, but we convert it to a simple percentage by moving the decimal two places to the left instead of the right…

Notice in that last example how we started with a real number greater than one, and after moving two decimal places, we calculated a percentage greater than 100. Percentages are fractions of 100, but those fractions can be improper. So 125% is a perfectly fine percentage, it’s just representing a value greater than a whole. You’ll see values like this often when you think about percentage difference amounts, for example if one item costs 125% of another.

How to Calculate Percentages

Calculating percentages can be more difficult if the total amount (the value we’re starting with as a denominator) isn’t a factor of 100. That’s what this the fraction to percent calculator on this page does really well for you! Just enter whatever values you need and you’ll get a result, probably as a percentage with a decimal. You’ll be converting fractions to percents with zero stress.

How to Find Percentage Increase

When you are learning how to find percentage differences between numbers, for example determining the percentage change from one value to the next, you are looking at the difference between two values. The important amount is the net change between the first value and the second, so the first step is subtraction. For example, if we started the day with $10 in our pocket and we ended with $15, then the difference (the change) is $5. If we know the amount of difference, how do we calculate the percentage increase?

Our percentage increase in this example is 50%. You can get more detailed examples about how to calculate percentage change here… Percentage Increase and Decrease Calculations

Are you looking to practice your percentage calculator skills? There are a number of great percentage worksheets on this site at the links below! 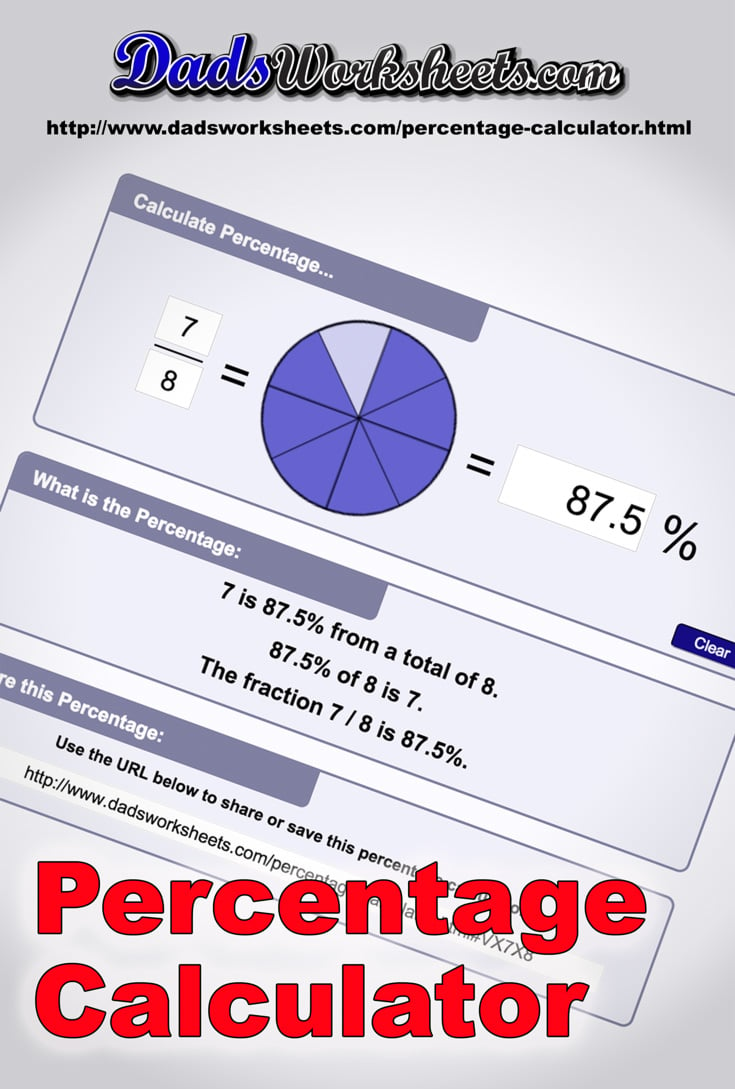