Welcome to the Fraction Calculator

This page hosts a fraction calculator that can perform addition, subtraction multiplication or division of two fractions. The values for the calculation can be simple or mixed fractions, or consist of only wholes. Input of improper fractions is allowed. Enter the values directly into the corresponding locations in the fraction calculator and the answer will be updated in real time. A visualization of the operand fractions and the answer fraction is shown in the panel underneath where the values are entered.

Don’t just use this fraction calculator to race through your homework! Solve the problems on your own, and use the calculator to check your work or see how to work a problem you don’t understand. This fraction calculator is a useful tool, but it’s not a substitute for a powerful mathematical mind! There is no substitute for developing a solid set of concepts, and this lesson provides an interesting introduction to fractions if you are looking for another approach.

When we learn the basic math operations, we start by dealing with the operations on integers. But the world is full of partial amounts of things... A half cup of sugar in a recipe or six tenths of amile or a quarter dollar. All of these represent a portion of a whole, and that’s exactly what a fraction is. We deal with partial amounts every day, so these ideas are familiar even if the way we have to work with them in math at first seems a little intimidating. Don’t worry! We’ll make it easy!

Real-World Uses for the Fraction Calculator

A fraction is a way to represent in mathematical terms a smaller part of a whole of something. So in our pizza example, if the whole pizza is cut into eight equal slices, and you eat three slices, you would have eaten three out of the eight parts of the whole. We represent this as a fraction as 3/8 and we say, “three eighths” when we read it aloud.

Another way to think about a denominator is to understand it tells you how big each fractional piece is, so for example if our pizza is sliced into eight pieces, you can picture in your mind roughly how big each one is. If our pizza is sliced into 20 slices, you can imagine that each slice is going to be much smaller. This can be a stumbling block… As the denominator gets larger, each fractional part of the whole is actually smaller. This can be confusing when you are first learning about fractions because we are used to larger numbers corresponding to meaning larger real-world values, but in this case a larger value in the divisor may actually make the value of the entire fraction smaller. For example, 1/8 is actually a bigger value (a bigger slice of pizza) than 1/20.

The top number in a fraction is called the numerator, which is just another fancy for that means “the thing that counts.” This represents the actual value in terms of how many parts of the whole are being represented by the fraction. In our pizza example, when you were really hungry and ate three slices, we represented that as the fraction 3/8. The numerator is three in this case and represents the three of the eight parts that make up the whole.

If this still seems a bit fuzzy, here’s another great description of fraction concepts with a few illustrations.

Mixed Fractions and Improper Fractions with the Fraction Calculator

Mixed fractions represent some number of wholes, as well as a fractional part. Three and a half cups of sugar would be an example of something that you would represent with a mixed fraction.

Sometimes working with fractions in the steps you calculate a numerator larger than the denominator. This is called an “improper fraction.” An example would be something like 9/8, which means 9 parts of a whole, where each whole is divided into eight parts. If the devisor is telling us a whole is divided into eight parts, if we have nine parts we have enough for a complete whole with one part left over. So this means 9/8 is the same as one whole plus one part, or the mixed fraction 1/8.

When you are using the fraction calculator on this page, you can enter either improper fractions or mixed fractions and it will calculate the results for you appropriately, but the answer will always be given as a proper fraction.

If you’re really thinking about fractions work, you might see that you can represent the same fractional amount with different fractions that have different denominators. If we go back to visualizing our pizza, if a whole is divided into four parts, half is going to be two slices. However, if the whole is divided instead into eight parts, half of the pizza would be four slices. In these examples, 2/4 and 4/8 are both the same amount of the whole. 2/4, 4/8 and 1/2 are all equivalent fractions because the represent the same real-world amount of a whole value.

Of course, the simplest way to represent any of those values is simple to say, “one half” and the fraction in simplest form that represents this is obviously 1/2. The two in this case is the smallest divisor possible that represents the fraction. Getting to the smallest possible devisor is called “reducing fractions” to their simplest form. This fraction calculator automatically reduces fractions in the answers.

Adding Fractions with the Fraction Calculator

The process of adding fractions is straightforward if the denominators are the same. Simply add the numerators, and the resulting fraction has the same denominator. So one slice of pizza (1/8) plus another (1/8) equals two slices of pizza (2/8). That fraction could be reduced to 1/4, and mentally that makes sense because those two slices represent one quarter of the whole.

Even though 2/16 is not a reduced fraction, for purposes of calculating the answer it’s okay to create non-reduced fractions or even improper fractions. We just want to return the fractions in proper reduced form when we provide an answer at the end.

Again, this fraction calculator does all of these steps for you, so if you need to see more examples, try a problem out and see how it works! Noticing that when you are adding fractions, the visual preview in the fraction calculator shows how the two original fractions might combine to form the answer fraction.

Subtracting Fractions with the Fraction Calculator

Subtracting fractions works much the same as adding fractions. You need to insure the fractions have a common denominator, and then just subtract the numerators and reduce the answer fraction.

Multiplying Fractions with the Fraction Calculator

Multiplying fractions is in some ways less complicated than adding or subtracting fractions because you don’t need a common denominator. However, a good first step is to see if the one or both of the fractions being multiplied can be reduced. This will make the calculations a little easier.

If either of the fractions are mixed, turn them into improper fractions using as described above. If you are multiplying a fraction by a whole value, turn the whole into a fraction with a denominator of one, so for example the whole 3 is turned into the fraction 3/1 for the sake of doing the multiplication.

There’s a good likelihood that the resulting fraction is improper or could be reduced. You should always reduce your answer and put it in proper form. Again, if you need help with this, try a fraction multiplication problem using the fraction calculator on this page and it will show you an example. This fraction calculator will always simplify fractions in the answer.

Dividing Fractions with the Fraction Calculator

This faction calculator handles mixed fractions for all operations and will return the result in simplest form. When the fraction calculator deals with mixed fractions, the procedure is almost always easier if the whole number is multipied by the denominator and added to the numerator to create an improper fraction. This conversion from mixed numbers to improper fractions allows fraction problems to be treated just as though the whole numbers were not involved.

The fraction calculator does this internally to solve mixed fraction problems.

You're Ready for Fractions with Our Online Fraction Calculator

When you’re ready for more, try out the fractions worksheets below for practice and share this fraction calculator with your friends! 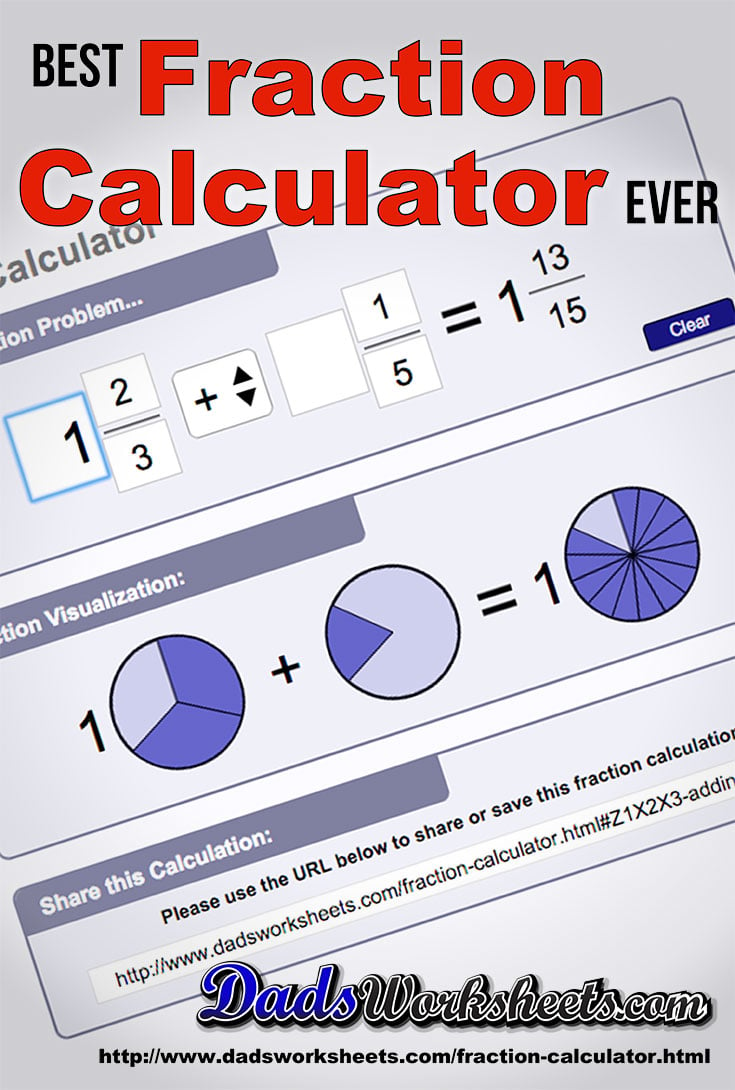