The worksheets on this page require grade school students to solve problems related to the angles of triangles, including calculating interior angles, calculating exterior angles and calculating the lengths of line segments created from triangle angle bisectors. Click the images below to open each PDF worksheet with answer keys and get your triangle geometry practice started!

These triangle worksheets make use of the Triangle Sum Theorem which states that the sum of the interior angles of a triangle is always 180 degrees. More details on how to use this triangle postulate to calculate misisng angles are discussed at the bottom of this page. 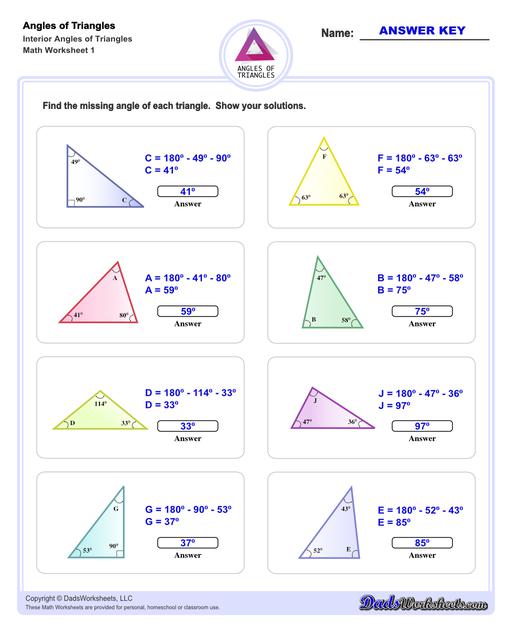 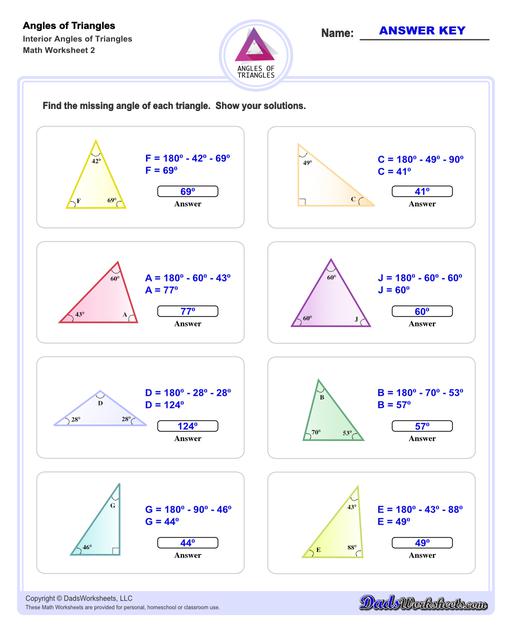 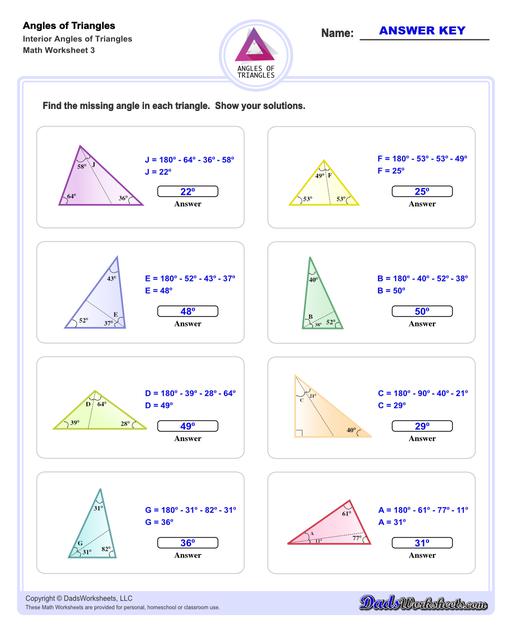 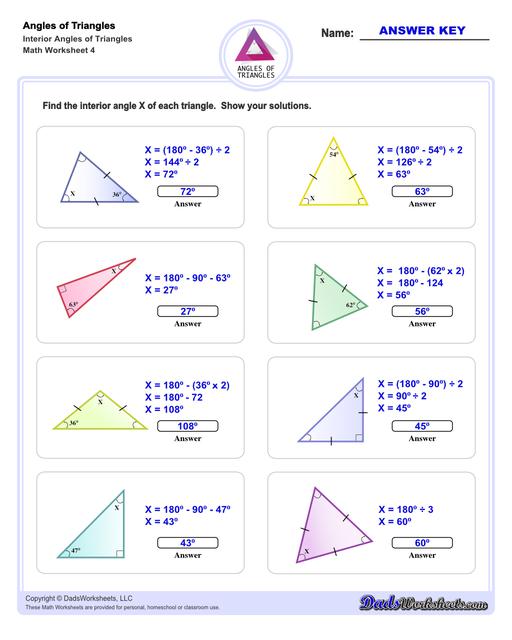 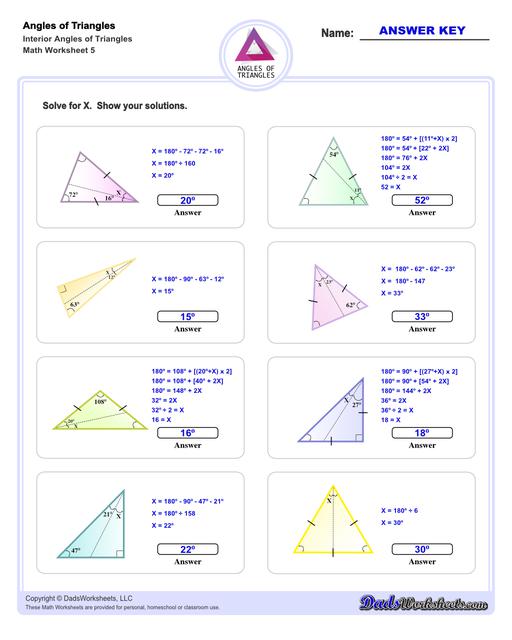 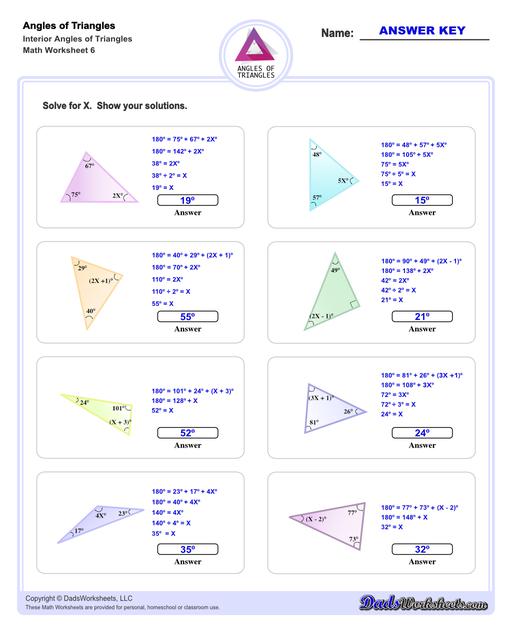 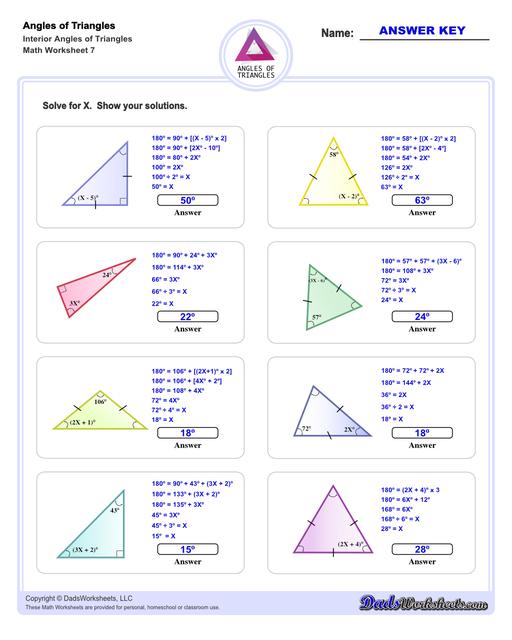 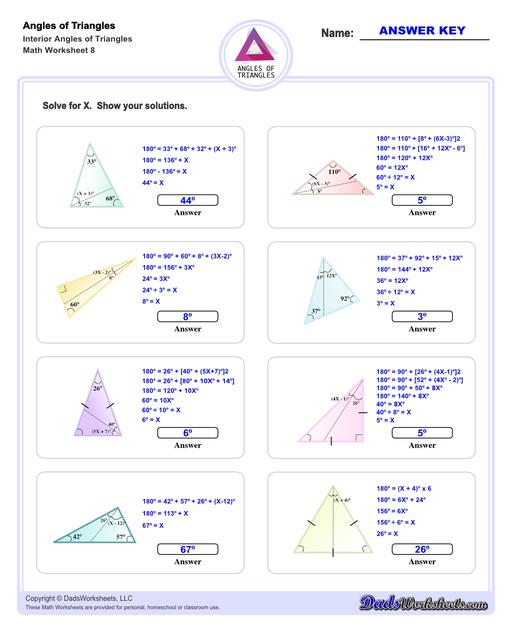 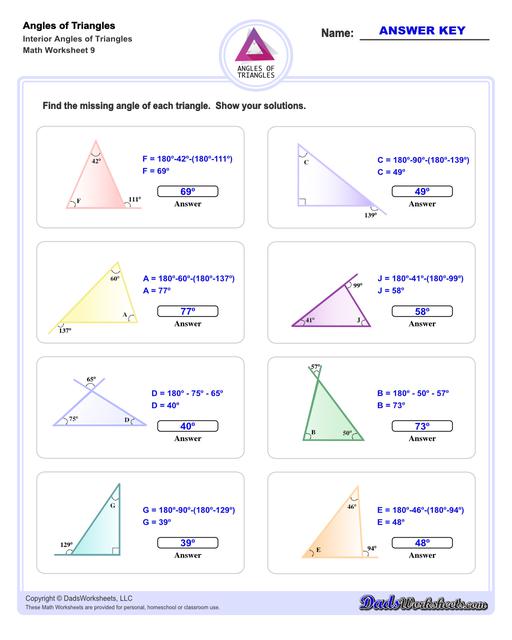 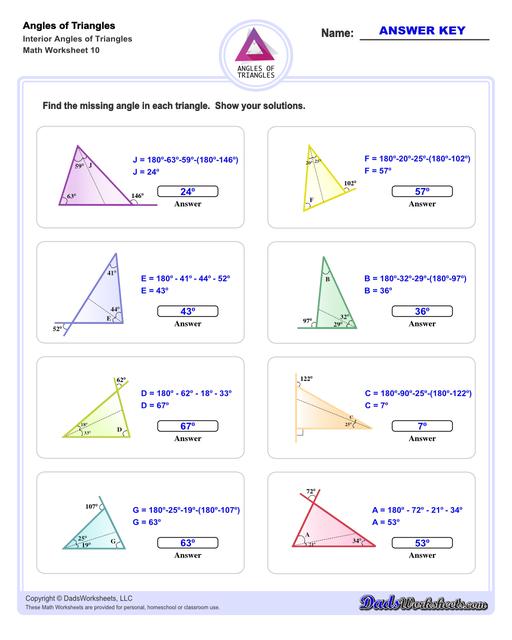 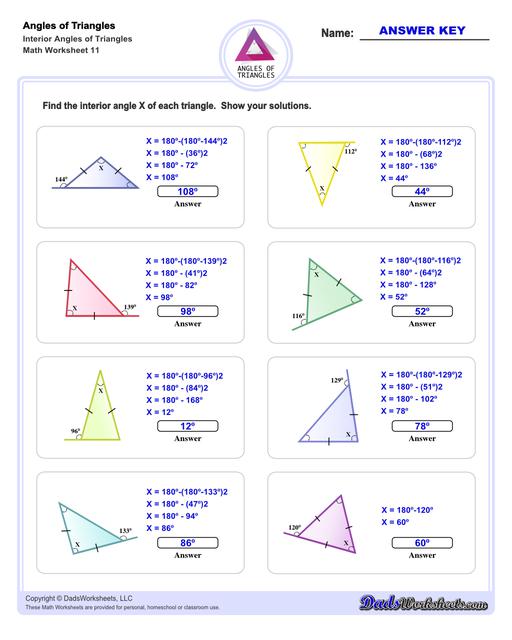 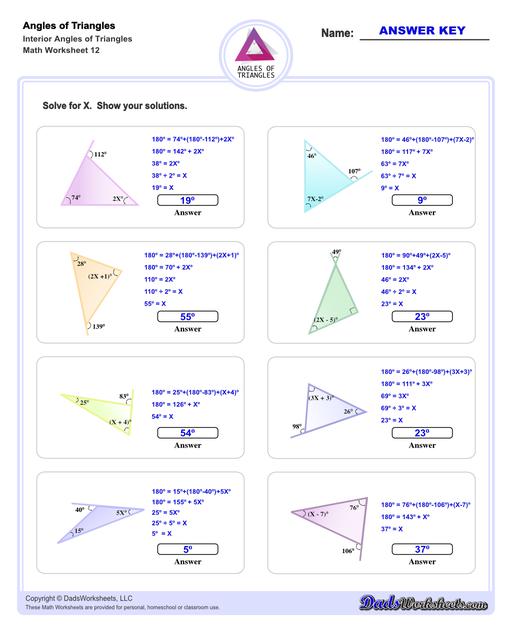 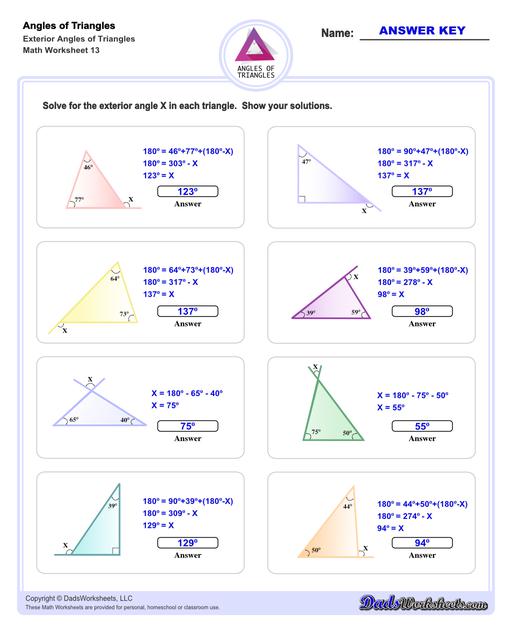 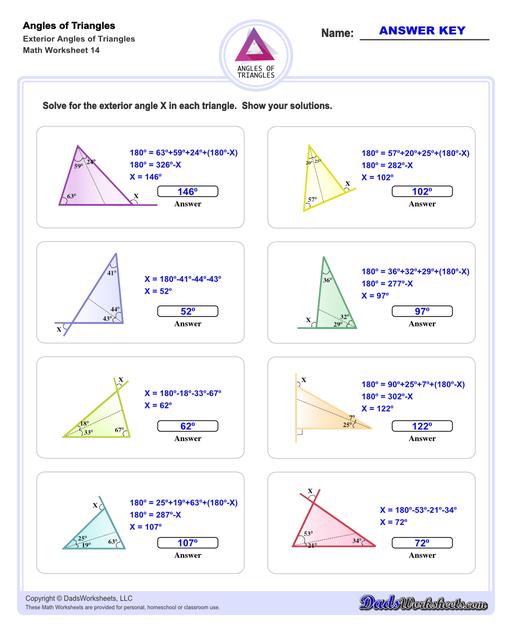 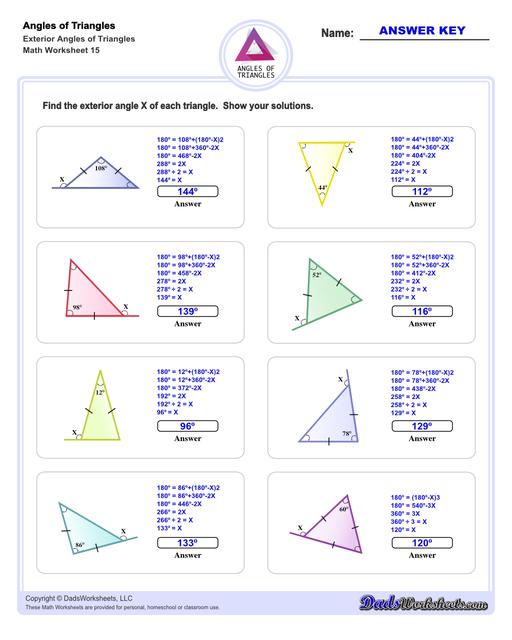 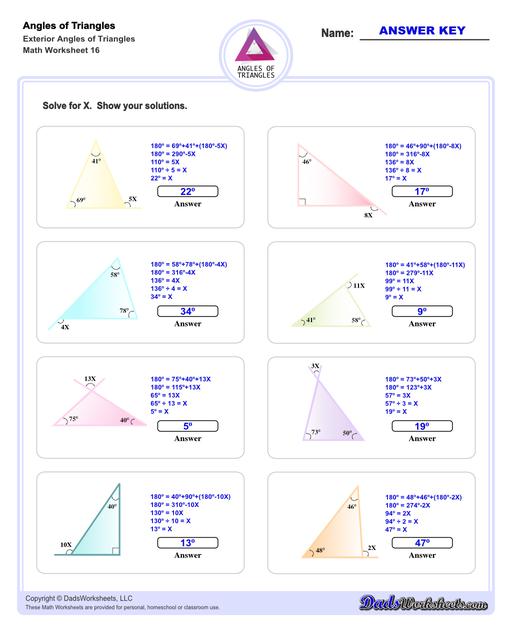 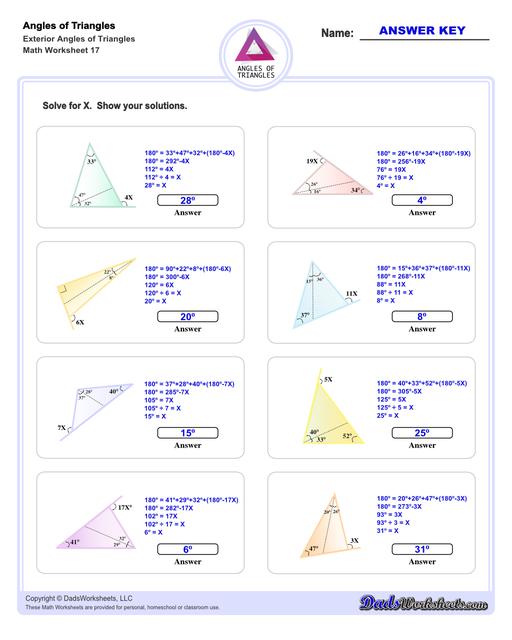 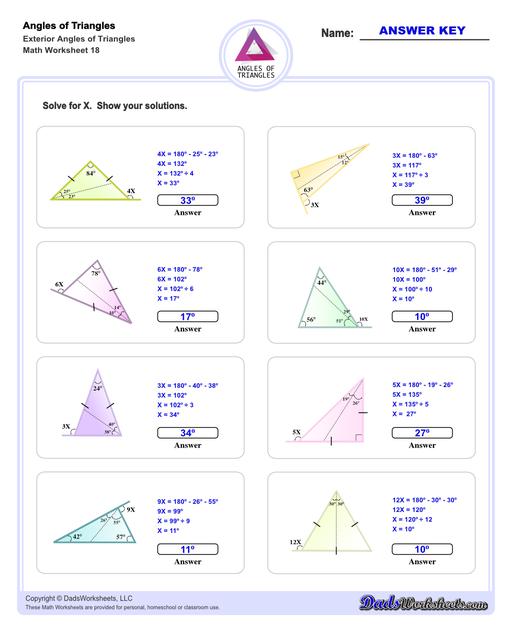 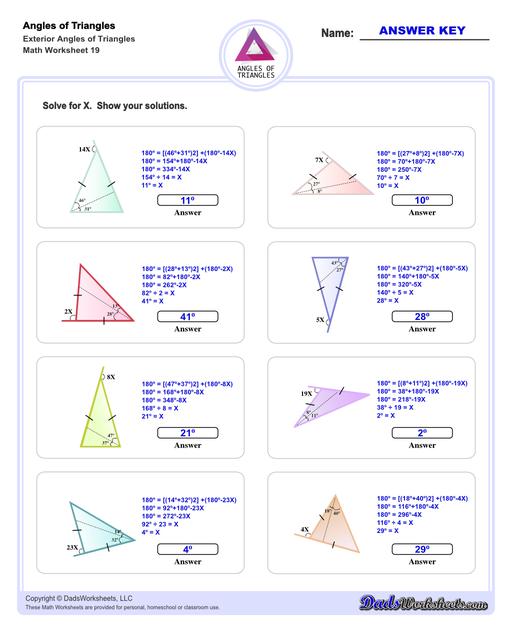 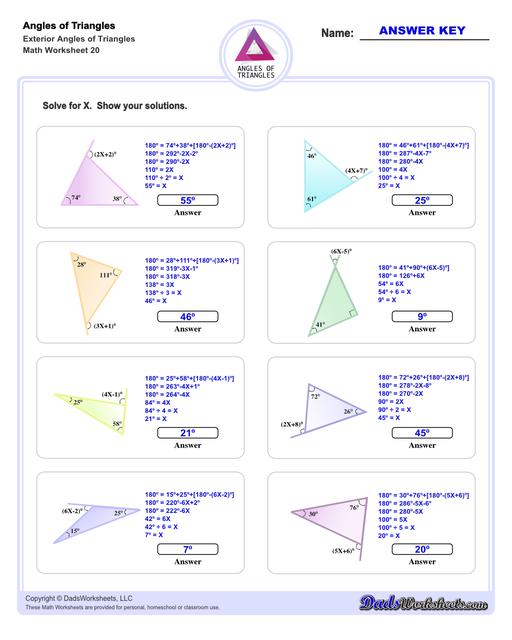 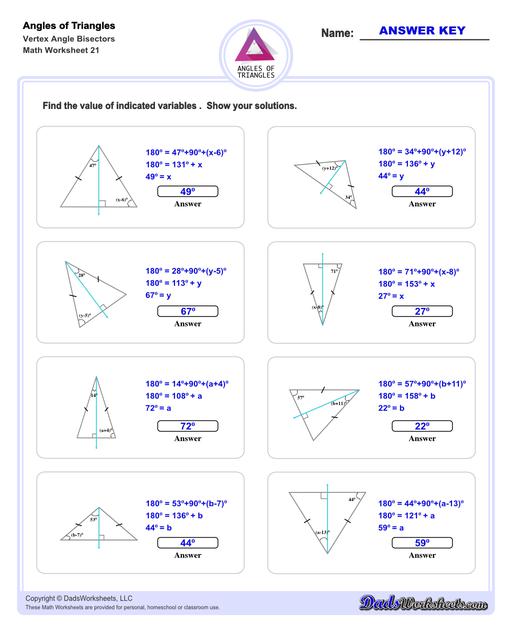 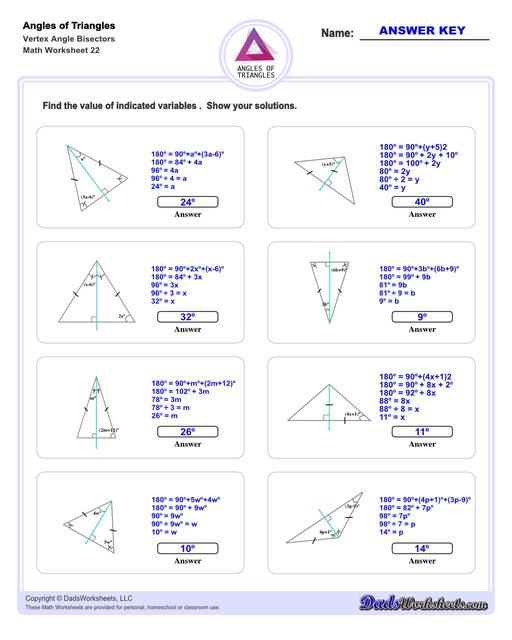 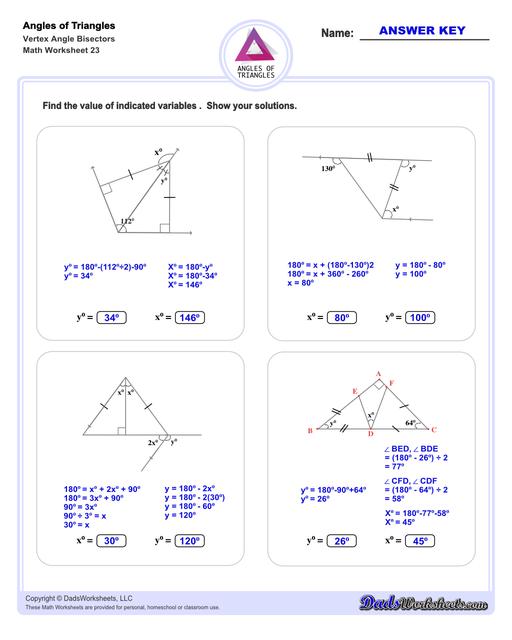 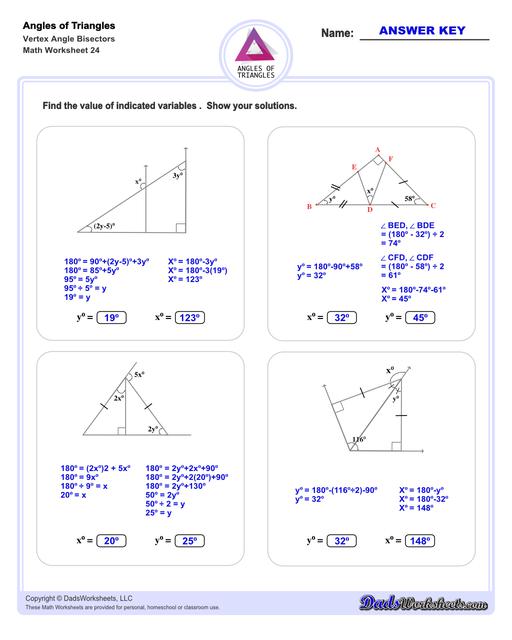 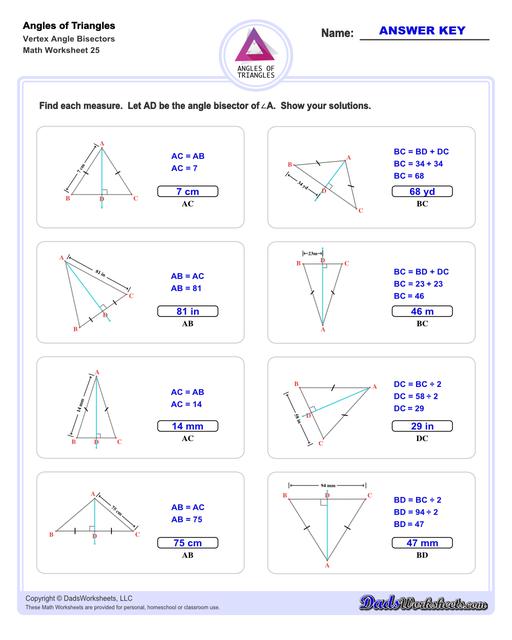 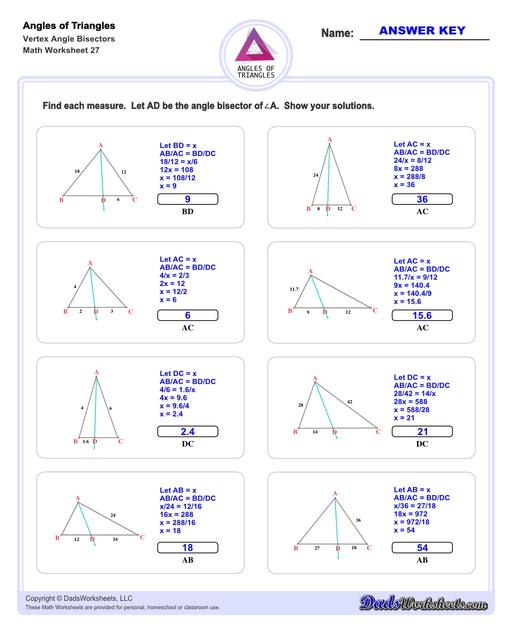 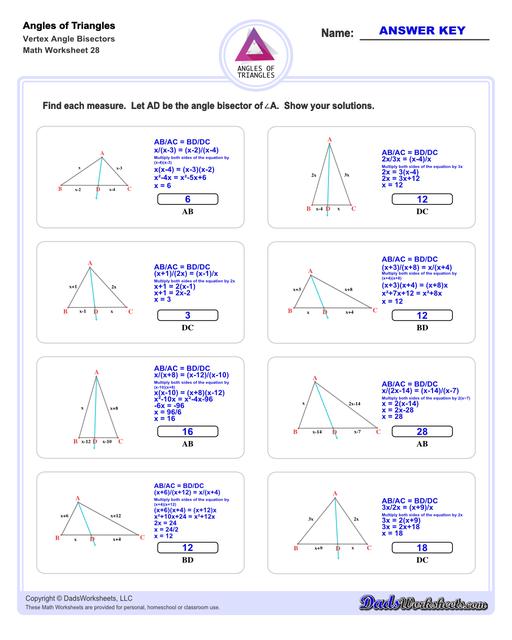 The sum of the angles of a triangle postulate can be used to find a missing interior angle of a triangle given the other two angles.

If you know two of the three angles of a triangle, you can use this postulate to calculate the missing angle’s measurement. For example, if ∠A and ∠B are known, ∠C can be calculated using the following equation…

Formula for Calculating a Missing Interior Angle of a Triangle

A common problem is calculating a missing angle in a right triangle. In these triangle problems, we know that one of the angles must be exactly 90° therefore only one other angle must be known to calculate the third missing angle:

Formula for Calculating a Missing Interior Angle of a Right Triangle

Another common problem involves finding the two base angles for an isosceles triangle given the triangles vertex or apex angle. Because the legs of an isosceles triangle are equal, the corresponding adjacent angles at the triangles base are also equal, so calculating the measure of the leg angles involves substracting the vertex angle from 180° and dividing the result among the two remaining angles:

Formula for Calculating Base Angles of an Isosceles Triangle

Given an isosceles triangle ABC, where ∠A is the apex angle, the base angles ∠B and ∠C are calculated as follows:
∠B = ∠C =
180° − ∠A
2

An angle bisector of a triangle is a line that divdes one of the triangle’s interior angles in half. The resulting line segment splits to opposite side of the triangle into two line segments. The Triangle Angle Bisector theorem states that the angle bisector divides the opposite side into two line segments that are proportionate to their adjacent sides. The triangle angle bisector worksheets on this page allow students to practice determining the length of these bisected sides for different types of triangles, starting with equilateral and isosceles triangles (where the bisected segments are equal), and progressing more generally to obtuse and acute triangles where the proportionate relationship is used to calculate two different lengths. 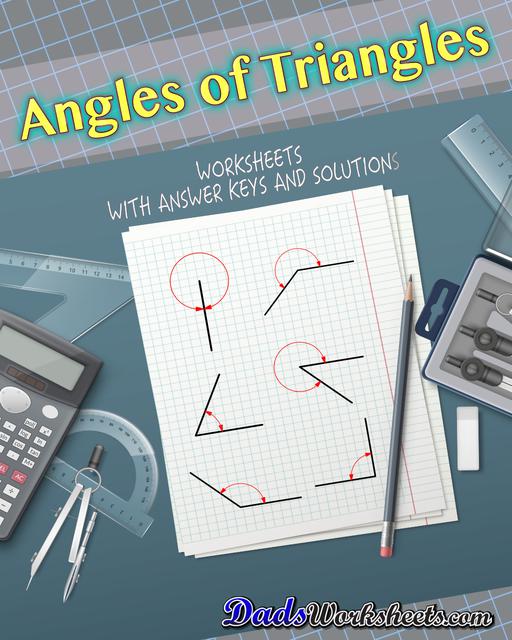